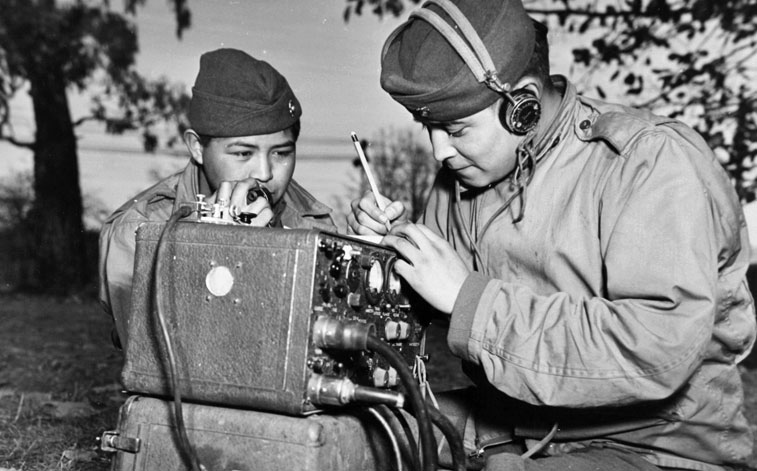 In early 1942 the world was at war. The Allies were losing ground, in part because they couldn’t transmit messages without them being intercepted by the enemy. Japanese cryptographers were cracking Allied codes at an incredible pace, leaving the Allied forces at a severe disadvantage.

Realizing this, a solution was proposed to the United States military that was unique to Indian Country. Native Americans languages were obscure, complex, and often unwritten, which made them ideal for creating and transmitting unique codes. Orders written in English were translated into unique words created using Native languages as a base and then translated them back to English on the other side. Pioneered by Cherokee and Choctaw Indians during World War I, Code Talkers were made famous by the more than 400 Navajo servicemen recruited during World War II to help level the playing field against the Japanese and Germans.

The Navajo Code Talkers were made up of Navajo tribal members from Arizona and New Mexico, many who had never traveled outside of their own reservation. The Code Talkers were deployed into the Pacific Theater and took part in every United States Marine mission from 1942-1945, helping the Allies regain control of the Pacific.

Just three years after the first Navajo Code talkers began their mission, six battered American soldiers hoisted a flag over the island of Iwo Jima, signifying American victory and freedom. Nearby was a little known photographer named Joe Rosenthal who captured the image, the result of which immortalized the scene and the men forever. One of those men was a 22-year-old Marine from Sacaton, Arizona named Ira Hayes.

Hayes was a member of what was then called the Gila River Pima Indian Tribe and served in the Marines for three years, taking part in several battles throughout the Pacific. Hayes’ service earned him both Navy and Marine Medals of Commendation for acts of heroism, as well as the Combat Action Ribbon for performance under enemy fire. After the battle of Iwo Jima, Hayes became a national celebrity and, although he was never comfortable with his newfound fame, his pride in his service was unmatched.

Hayes and the Navajo Code Talkers may be the most recognizable, but Native Americans have served in the US military for nearly 150 years. Starting in 1866, dozens of Native Americans served as United States Army Scouts. Though these scouts were controversial, they were vital in providing knowledge and insight about the mysterious American West. Throughout their three decades of service, 16 Scouts won the US Medal of Honor for acts of valor exceeding the call of duty.

This Memorial Day, Native Americans throughout the US celebrate a strong tradition of service and contributions as well as a commitment to the land that is their home. Their service has led to countless acts of heroism and thousands of lives saved. Twenty-seven Native Americans have received the Medal of Honor, which is one small example of the bravery and resolve of this proud people. During this Memorial Day season, we remember their sacrifice and commitment to honor, service, and the freedoms that we all enjoy today.